So a big ol’ fat field mouse crawled out from under the cabinets and plopped down on the kitchen floor the other night.

This is a fact, friends. Every single year, the mice attempt to storm the castle to make it their own and each year, I fight back, with everything I’ve got, to keep them out.

And if you so much as give an inch — in moves their family, and cousin’s family and babies — so many babies!!!  So NO!!! We do NOT take pity, we don’t seek out humane and ethical treatment of animals – and we don’t share our thoughts or methods with PETA. This is MY house. They have 160 acres to go build their own house.  They cross the threshold of MY house and the battle is on!

In years past, a breach of the household barrier by rodents has caused me to scream in a voice that doesn’t even sound like my own then vapor lock as I continue to scream but no sound actually is produced. This year, when my fat little friend, plopped her not so stealthy self down in front of me — I just looked at her and said, “Oh no – not this year!” She froze, momentarily, then hopped back up beneath the cabinets as if to say, “These are not the drones you seek,” but it was too late. I most definitely saw her.  And that meant war.

I quietly slipped down the hall to the shop where I keep my rodent arsenal.  See – I’m getting better at this farm thing.  Snap traps, bait traps, sticky traps, poison blocks — what do you need? I’ve got at least one of everything. Old ones, new ones, outdoor and indoor varieties — I’m not admitting to contraband, but let’s just say I may even have a few things we can’t mention online.  Ironically, the old fashion broom proved to be the most damaging in years past – not to the rodent – but to the wood floor, wall and glass in the French doors.  Oh, and it smashed a humidifier to a million pieces in the process but the mouse escaped without injury.  We’ve upgraded equipment and trained since those rookie days.

Like a rodent killing Ninja, I proceeded to set a mine field of various traps from the kitchen sink to the pantry, in the pantry, under the furniture, in the cabinets, along the walls, beneath the doors — if there was a space — there was now a lethal rodent snare.

It’s been a week and nothing.  The humanitarian in me (it’s there – just deeply buried beneath rodent despise), was relieved.  The rodent killer and mouse hater wasn’t.  I know that where you see one, there are really twenty and that’s just gross.

But tonight I heard the tribal call of an animal caught in a trap. It was a big guy and he was thrashing about, making a mess and wreaking havoc as he attempted to rid himself of the trap.  I walked into the kitchen to find a hopping, yelling husband with his foot stuck in a giant sticky trap, glue strands extending from one counter to the other.

It’s not exactly what I expected but it sure made me laugh.  A little dish soap, oil based lotion, bath water rinse and he was free.  Frankly, I’m just happy it wasn’t his pinky toe in a snap trap that caught him.  Either way, this species has always been catch and release – so I let him go – but I think he’s going to hang out awhile and I’m happy about that. 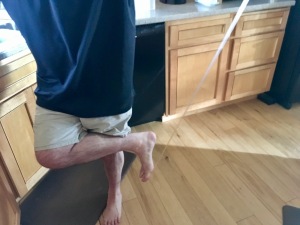 The mice, on the other hand, I expect to fight this battle with until next fall, when they go underground and hibernate.  This is a farm.  This is what we do.